Did Our Ancestors Drink Alcohol? 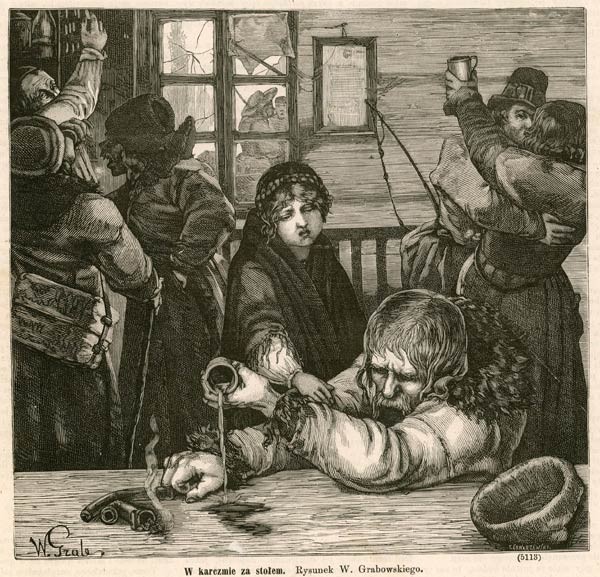 Those of you who have toured Ukraine have probably experienced the local special culture of consuming alcohol at different celebrations. It has had a long tradition, but the role of alcohol was much bigger in the past. We have researched this topic and some of the discoveries shocked even us.

Have you ever heard about the so-called Propination Laws? The name comes from Latin “propinare”, which means “to treat”, “pour out”. Propination was a privilege given to landowners from the supreme authority to monopolize the duty-free production and the sale of strong alcoholic beverages. This was combined with coercion of the peasants to buy the alcohol. Yes, they were forced to buy it! This phenomenon, unique for the territory of the Polish Lithuanian Commonwealth, did not have any equal in the rest of Europe. Propination was abolished by Prussian, Austrian and Russian authorities in the 19th century. However, the consequences from so many years of alcohol use were destructive and long lasting.

The Galician population suffered the most from propination since this law existed there for more than 300 years. It started as early as 1496 when, by the decision of the Polish Sejm along with the severe restriction of the right of peasants to leave their villages, the royal monopoly on trade in alcoholic beverages was transferred to the gentry that owned these villages.

Initially, it concerned only beer, but later included vodka and wine, as well as various types of “honey drinks”. The peasants did not have much choice: they either had to buy it or do corvee labor. The amount of alcohol to buy or the corvee labor to perform was calculated on the number of family members. The more family members there were, the more alcohol had to be bought or labor had to be done. Those who didn’t comply had the alcohol dumped in front of their houses and had to pay the costs of the alcohol.

What was easier in your opinion: to work hard or just buy, drink and forget about everything?

Propination was the main cause for massive alcoholism. Brewing and traditions of producing honey drinks that were common before propination were degraded. Instead, low-quality vodka was produced. At the end of the nineteenth century it was mostly cheap vodka from potatoes, much worse in quality than rye. With such favorable conditions of distribution, it was an extremely profitable business, one that did not depend on weather conditions but on agriculture. Originally, propination rights were received by magnates and the gentry from princes and kings “for some special merits”. The rights were often leased to tavern owners, many of whom were Jewish. Renting out alcohol production was much easier than renting land.

The taverns were usually built on the edge of the village, away from churches and public buildings. There was competition, as there could be two or more taverns in one village. Taverns were a popular place to spend time. It was here that various work contracts were signed (it was common to pay for work with vodka too), and sometimes even marriage contracts between the parents of the future bride and groom. There was an opportunity to take alcohol in debt or pay with clothes, shoes, and cattle. At night, taverns often turned into transit warehouses of stolen goods and livestock. These too could also used by thieves to pay for alcohol.

Here is the contemporary description of a tavern for you: “Our Dear Tavern is very special, it is neither a peasant’s nor townee’s hut … As soon as you come in you are hit with the wave of alcohol evaporation and clouds of tobacco smoke. Everything inside is ours, everything is so dear to us and native: the portraits of Shevchenko and Franko on the walls, and sometimes even the icon of Saint Mary covered with an embroidered towel… Here is our dear Tavern owner standing near the cabinet with big and small bottles of hard liqueur… He’s always ready to put a bottle of vodka, just a shot or a bumper of Kalush beer on the table in front of you. In order to please you even more he will put on a gramophone. The inn is full on Sundays, there’s no place to turn in. The local elite sit at separate tables: the village mayor, his councilors and the heads of all cultural and educational institutions. It is where the village budget is approved, taxes are collected. People are having fun, that in most cases ends with severe fights. ” (In the Dear Tavern. Memoirs by M. Zyzda)

There were 23,269 taverns in Galicia at the end of the 19th century. That makes it 1 tavern per 233 people. 26 liters of vodka per person per year were consumed. An average resident of Galicia would spend at least 5 thousand krons on alcohol in his life, a sum which equaled the value of a peasant household of medium size. There was the habit of giving alcohol to children to improve appetite and sleep, or stop the baby from crying. Children sometimes drank with adults in taverns, even went to school drunk. The girl who did not drink spirits was not liked by the boys, so it was harder for her to get married.

Propination rights in Galicia were officially abolished in the 1870’s but continued to operate for several decades. The owners received compensation that 5-6 times exceeded the annual income from pubs in 1901.  However, the situation was dire in the late 1800’s and the beginning of the 20th century. To give you a better idea: the consumption of salt and sugar by the Galician population increased by 9-12%, but vodka consumption increased by 35% in the 1890’s. There was a pattern: the poorer the village was, the more its citizens drank, and vice versa. One can say that “vodka beat education and medicine”, because most people drank, while only 8% could read and write. Also, there were only about 500 teachers and 250 medical assistants per 10 thousand tavernholders!

The so-called “movements of sobriety” were organized by the Greek-Catholic clergy to combat the alcoholic “boom”. There were brotherhoods that conducted an active anti-alcohol campaign: they arranged rallies, distributed literature on the topic of alcohol damage, lectured, boycotted the taverns. For example, protests against the growth of the number of pubs took place in Lviv on October 12, 1908 and the number of participants was about 5000 people: in Lviv, on Zhovkivska street alone there were 50 taverns at that time.

Things only became more civilized from the modern point of view in the 1st half of the 20th century. The Polish government passed a series of anti-alcohol laws in 1920. It was forbidden to sell alcohol on holidays and sell it less than 500 meters from any place where at least 15 people worked. The time to sell was limited to 5-7pm and the drinking age of 21 years was set.

Impressive, isn’t it?!! We invite you to follow Andriy Dorosh on FB to get updates on our future posts and read about our heritage tours of Ukraine to learn more about the possibilities of visiting your ancestral country!

J.V. Stasiv. Sobriety Movement in Eastern Galicia in the Middle 19th – First Half of the 20th Century.

B. Savchuk: Taverns: Alcohol Politics and Sobriety Movement in Western Ukraine in the 19th Century – 1930s.