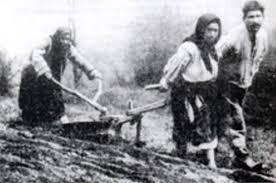 In this post I would like to tell you of another tragic event in the lives of our ancestors who lived in Galicia, and one that has been described by Martin Pollack in his book title “Emperor of America – The Big Escape from Galicia”.

Horrible events took place in 1889 as a result of an abnormal drought. Droughts were quite common in Galicia, and brought many hardships to the poor, rustic population who lived off their own produce.  At Dorosh Heritage Tours we translate letters written by a Ukrainian family living in a small town of Kniazhe, present Ivano-Frankivsk (former Stanislawow) Province, to their family in Great Britain.  Fears of drought haunt the 77 year-old local citizen, and in every letter she writes in detail about the hot sun, cracked soil, burned potatoes, cucumbers, carrots and other crops, and her fears of crop failure.

But the drought of 1889 was catastrophic with the very real threat of famine. There was no hay to feed the livestock, nor money to buy it had there been hay available. Hundreds of merchants raced to a village to buy a good horse for 2 guldens, when the regular price was 15-20 guldens. Just a few months later, the price went down to 50-30 kreuzers (learn more about Austro Hungarian money in this post). Of course, it is better to sell a horse for 30 kreuzers rather than let it die. Eating horse meat was not common in Galicia, and the church was adamantly opposed to it. Religious traditions forbade eating horse meat in the Jewish populations, as well. The horses were often slaughtered right in the pasture near the village, and merchants would buy only the skins. Sometimes they bought the bones that were later ground to make glue and fertilizers. A mill was built for this purpose in the town of Klymkivka (Klimkowka) near Rymanow, and was named “The First American Steam Mill for Bones”. Thousands of horse bodies were buried in dumps around the village in the winter in 1889.

On the road between the towns of Zvyniach and Verbivtsi, in present Ternopil province, there was a pile of several hundreds of skinned horse corpses. The carrion attracted foxes, wolves, ravens and dogs, and hungry pig herds from the nearby villages came to eat, too.

Even the owners of the bigger farms were affected, and in many villages there were no horses in the stables. Big landowners came up with a new business idea. The horse that could be bought for 30 kreuzers would cost 20 guldens, if it was recycled to make fertilizer. The recipe was simple: 30cm layer of soil, 30cm layer of chopped meat, 5cm layer of dry lime and more soil on the top. This pile had to be mixed in 3 months. The bigger bones could be collected and sold at the Bones Mill. The Polish landlord, Augistinowicz, bought thousands of horses, and killed them on his field near Shchyrets, present Lviv province. However, the winter was very cold, so the frozen meat could not break down into the soil. Witnesses reported that there were piles of horse corpses lying in the fields near Shchyrets.

Many Galicians were affected by hunger and typhus, and older people and children were the first to die. A reporter at the Kurier Polski newspaper was shocked to see starving citizens and wizened children in the town of Javoriv near Lviv. Newspaper articles told of horse meat being as tasty as goose breast, but most people in the villages were illiterate and would never read the newspapers. The situation attracted the attention of the authorities, and they offered favorable loans and salt from Wieliczka to feed the animals.

This support came too late for small farmers. Most of them had to sell everything they could, and use the services of emigration agents to move away. They were told that dogs and cats in America ate better bread than landlords in Galicia, and the agents went from village to village showing pictures of the beautiful ships that would take the locals overseas. One of the pictures showed the port where the ships from Europe arrived and the huge statue of a woman that was higher than a multi-storied building, wearing a wreath made of rays and holding a torch. They were told it was the Virgin Mary, the patron of Poland, and she was waiting for her beloved Polish people and, of course, for the Ruthenians as well. We now know that this statue is the Statue of Liberty that welcomed millions of immigrants to the United States, including many of our ancestors.

So, if your ancestors left Galicia in 1890 or shortly afterwards, you now know the reason for their emigration. We invite you to follow Andriy Dorosh on FB to get notifications for further posts about our past and check the other articles of our Time Capsule Blog

Source:  Martin Pollack. The Emperor of America: The Big Escape from Galicia.