Human Fates in the Whirlpool of Global Events

This photo is contained in one of 12 081 criminal files of record group P-3258 kept in the Archives of Lviv Province. It came to my hands as part of a family research project we are working on. Some of the files are available on the website of the US Holocaust Museum and you can find them here. 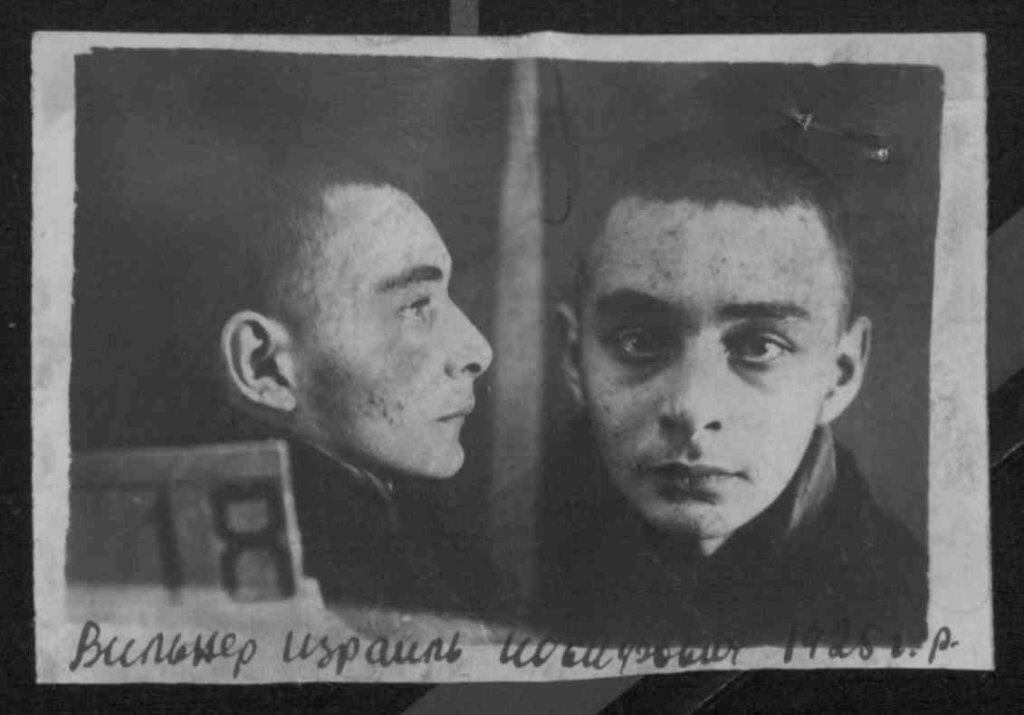 His name was Israel Wilner. He was 14 years old when he was arrested by the Soviet NKVD unit. His hair was black. His eyes were brown.

The arrest took place after Israel crossed the San River on October 25, 1939. He was captured on the left bank of the river near the bridge close to Wola Postołowa village. Israel was Jewish and he was trying to get out of the area controlled by the Germans to save his life. The San was the “border” that was set by German-Soviet Boundary and Friendship Treaty signed by Molotov and Ribbentrop.

Israel’s Soviet criminal file is quite short and the protocols are simple. He admitted his “guilt” right at the time of 1st interrogation held by the commander of the local border guard unit.

Israel was born in Wroblik Krolewski, a former Lemko village. 30 Jews lived there in 1939. His father was a farmer and his mother was a tailor. Israel finished secondary school and became an apprentice to the local Polish tailor, Mr. Siniawski.

Israel’s older brother worked as an accountant in Tarnow, a bigger city to the west of San. He was the 1st in the family to witness the persecution of the Jews. He came home and told the stories about the compulsory armbands and employee layoffs.

The self-preservation instinct responded. Israel, his brother, and his friend decided to escape to the Soviet Union and cross the border illegally. They hired a local guide. He took the payment of 50 zlotys. They never saw him afterward. They never saw the luggage that he stole either.

The boys decided to cross the river by themselves when it got dark. The family names of four NKVD soldiers who captured them at 9 PM are all Russian.

According to the interrogation protocol, Israel had “two flasks with some unknown liquid, a writing pad with different notes, documents and three photographs” with him. Some of them are attached to the criminal file.

The further procedure took the NKVD bodies about 8 months. Israel was put in the preliminary detention jail in Lviv, and later transported to Kirovohrad in central Ukraine. The city is named Kropyvnytskyi today. He admitted the fact that he “crossed the border illegally” at the time of all subsequent interrogations and signed the protocols.

Israel was found “healthy and able-bodied to do physical labor”. By the decision of the Special Council of People’s Commissariat for Internal Affairs, he was sentenced to 3 years in labor camps on 21 June 1940.

There is no data about his discharge. Did the 15-years-old boy survive the labor camps and WWII?

Israel’s story is one of hundreds of thousands of stories of people who were repressed, deported, or killed by the Soviets on the territory of Western Ukraine in 1939-41 after they annexed part of Poland. We all know what happened afterward.

It’s been eighty years since the events described above took place. The descendants of people who were lost at that time keep looking for information on them.

Almost seven thousand people are considered missing in Ukraine officially today – all of them disappeared between February 24 and the beginning of November 2022. The actual number is much more significant. Their relatives are looking for them too.  My friend Alla, who you can see in the video in the previous post is one of them. I want her to succeed very much. Just think how much her life and the fate of her family changed after the hot war in Ukraine started 8 months ago.

Use this link to subscribe to my newsletter and receive updates about the next posts. If you need any help with your research, feel free to send me a message.