Hutsuls, one of the groups of Ukrainian highlanders, are extremely colorful and original people. Even the most bitter and sad events – funerals – were turned into fun, dramatized occasions that originate in pre-Christian times. These pagan traditions have survived till our current times, and are closely interwoven with Christian customs. Let us take a tour to Hutsul lands in Ukraine, guided by Dorosh Heritage Tours, to learn more. In this post, we will talk about the traditions that were common 100 years ago and more, but some are still practiced today.

After death the body was washed and dressed in the clothes that every elderly person would have bought for this special occasion. The dressed body was covered with a white cloth.
The face of the deceased male was shaved. There would be a candle put into the hands of the deceased. The body was first located at a bench near the wall, and later put in the center of the house in a coffin on a special support platform. Afterwards, the doors and windows of the house were opened to let the angels come and take the soul of the deceased. The family would kneel in front of the body and pray. After completing the prayer, a cup of water and an oil lamp were placed at the head of the deceased, until candles were brought from the church.

To let other people know that somebody had died, a bonfire was lit in the yard in front of the deceased person’s house, and a white flag was hung in the window. The family of the deceased did not have the right to change clothes – they had to wear the same clothes they were wearing when the person died. Women untied their hair, and men took off their hats.

The person who was sent to the church to bring candles, also was ordered to ring the bells. It was believed that after death the soul wandered around the same places they had walked as a living person. Since people could live for many years, the souls would wander for a long time too. The bells were believed to call the soul and bring it home to the body.

The family also asked for a trembita player to come and play, to pass the sad news to the more distant districts of the village or other towns. Also, the sounds of the trembita sent the soul to eternal rest, the tomb. The richer Hutsuls could afford to invite not only a few trembiters, but also musicians who played the horns. The coffin was ordered at the carpenter’s, and the grave-digger was ordered to dig a pit.

People would come to the house at the sounds of trembita and bells. Everyone arrived with a lit candle and put it at the window or near the body. Such a meeting was called a “privil”.

During the privil the young men of the village (“legini”) tried to amuse the grieving family of the deceased, and there were some games played at the house near the body. The most widespread games were quite bizarre:

Vuglik” – a hot charcoal was hung at the entrance to the room. The folks would stand around and blow at it, till it reached the face of the person who could not blow heard enough and it would burn him. Everybody would laugh loudly.

“Pizhmurki” – someone would put a scarf over his or her eyes and run around the house looking for others. The game lasted until everyone was bored.

“Perstenets” – the boys and girls sat in a circle and put their hands like they were going to pray. Somebody would put a ring into someone else’s hands, and there was a person who had to guess who was holding the ring. If he guessed correctly, it was his turn to put the ring into the hands of someone else. If not, he had to kiss everyone. If someone did not want to kiss somebody they were dirtied with soot. At that, a lot of laughter was heard.

“Skipka” – the young folks handed a burning stick to each other, and if the fire went down the person holding the stick had to kiss all the girls.

“Grandparents” – a couple would dress up as the old grandfather and grandmother. “Grandfather” would have a hat and an axe. Both “grandparents” went to the body, scoffed and prayed. Then the “grandmother” would start making up funny stories about the life of the deceased, telling how good he used to be.

At dinner, the church clerk would come and read a psalm. At the same time, someone would  watch the deceased to check whether the body was moving, and to make sure that the person was really dead. The relatives cried and prayed over the deceased during breaks between readings.

The rituals described above lasted for 2 days, and the body was usually buried on the 3rd day after death. When the coffin was being taken out from the house, the carriers would hit it on the threshold 3 times so that the deceased “received a forgiveness from the threshold”. The explanation goes that it was forgiveness for the deceased when he was alive, and did not  pay attention to how difficult it was for the threshold to keep the house supported. The water that was used to wash the body was poured into a mountain river. The same was done with soot and the rubbish that was swept from the house where the deceased had been laid. The door was immediately closed, so that death could not enter the house again. 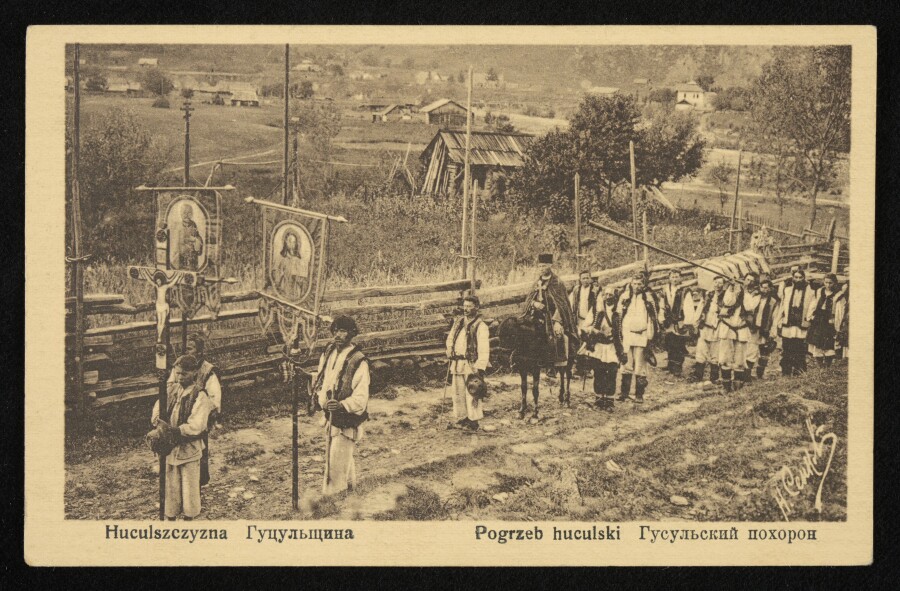 The funeral procession went to the church to have a special service and then to the cemetery. The family threw money into the pit, so that the deceased had the means to travel to the other world. Hutsuls have a long-held belief that the road to God is very long and difficult. It goes through the sea and the mountains, but the road to the Devil is smooth with bridges across the sea on the way. After the funeral, everybody had to return to the village by the same road, so that the soul could come back to the house again.

In the evening after the funeral, the family placed a bottle of water on the table with a cross and a candle burning all night. According to the beliefs, the soul returned to visit the house again and came with angels. They would sit down at the table, drink water and eat flour. Therefore, the place on the table where the candle stood was sprinkled with flour. The next day it was visible that the soul had eaten: there would always be marks in the flour.

Please, follow Ukraine tour guide Andriy Dorosh on FB to get updates on our next posts on Ukraine at Dorosh Heritage Tours website.