The Phenomenon of a Ukrainian Pich (stove) 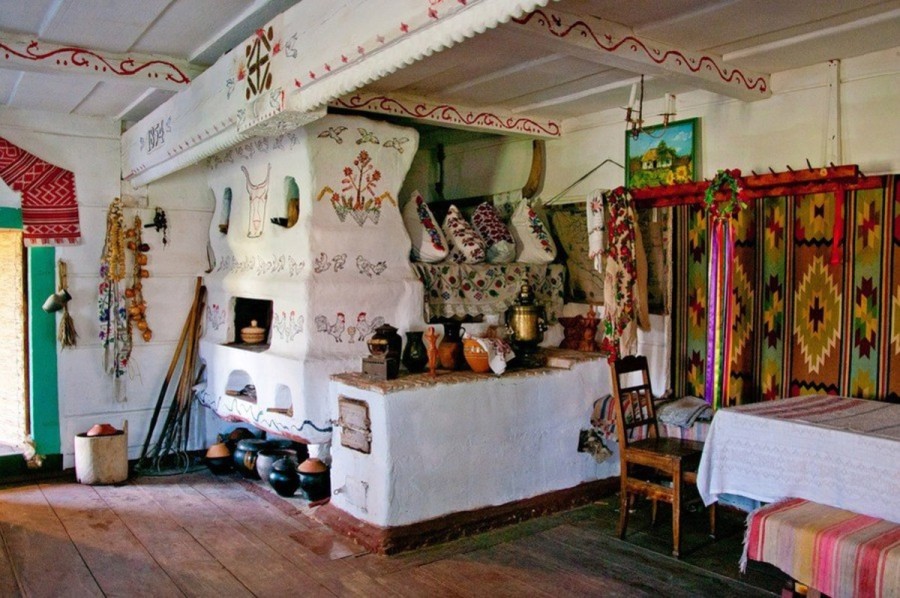 Would you like to know where the umbilical cord of your grandfather is buried and what kind of function the oven in his house performed but for cooking? Today Dorosh Heritage Tours will continue to describe the lives and homes of our ancestors and our research into the phenomenon of the Ukrainian pich.

Our ancestors built an amazing structure to heat their homes, to cook their food and to perform other household functions. It was called PICH and it can be translated as a masonry heater, oven or stove, and evidence of the same type of heater has been found to have been used as far back as 5000 BC when archeologists uncovered massive blocks of masonry that were used to heat dwellings. In Germany the stove is known as kachlofen or steinofen. These ovens were made of clay, brick, stones and other heat retentive materials which enabled the stoves to hold heat for long periods of time. As well, small pieces of wood and sticks could be burned in them. They were and are very efficient heat sources. They were often decorated with tiles, paint, etchings, and other decorative finishes. These heaters are still being built all over the world, of masonry, brick and tile. They are also known as tiled stoves, masonry fireplaces, masonry heaters, masonry ovens, or ceramic stoves. For our purposes, we will use the Ukrainian equivalent “PICH” in this blog, and in places the word “stove” will be used.

So, let us travel to Ukraine with Dorosh Heritage Tours and learn more about Ukrainian pich (stove)!

The pich played a very important part in the life of your ancestors if they came from a village. It had a central location in each house: it was an integral part of the life cycle, the center of the family and family life in general. The pich was used to heat the dwelling. It served to cook – bake, fry, stew, boil and it is where the food for winter was preserved, such as fruit and mushrooms that were dried. The children were born on the pich. It is where our ancestors slept, doctored themselves and spent winters. They died there, as well. Such an important role contributed to a particularly respectful attitude towards the pich.

Interestingly, in the worldviews of our ancestors, the pich and fire are clearly associated with the other world. The reason for this is found in the depths of the millennia. In the pre-Christian tradition of the ancient Slavs the entrance to the other world was accessed by burning the body, which was the culmination of the funeral rite. We know that this tradition was practiced by the people of the late period of Trypillian culture on the lands of modern central Ukraine as early as 3000 BC.

Thus, it turns out that the pich is not only a heating device with all that it implies, but also a “mediator”, a link between the earth and the sky or hell! Let’s try to find some evidence on how our ancestors treated the pich in the late 19th and early 20th centuries.

So, yes, in Polissia (northern Ukraine) the pich performed the function of one of the channels into the other world. Most likely, it also has to do with another ancient tradition: burying ancestors inside the house. Ukrainians preserved this tradition for quite a long time; for example, by burying unbaptized children in the house, often under the pich. In addition, the placenta and umbilical cord were buried under the pich after the birth of the baby (villages Pihotok and Velyka Chernigovka, Ovrutsky District, Zhytomyr Oblast).

It was believed that after baking bread, it was necessary to put a few chucks of wood into the pich. The motivation for this is rather unusual: “As you will die, you will be able to grab the chuck and pull yourself out from hell” (Yazhberen, Naroditsky District of Zhytomyr Oblast). At the borderline of the Boiko and Hutsul areas, the hostess would throw a handful of flour into the pich when baking bread, “so that the dead can smell it when it burns” (village of Lukvitsa, Bogorodichsky District, Ivano-Frankivsk Oblast).

The pich and smoke were used to contact dead ancestors and ask them for help in solving various  problems: “If a man or his cattle are lost, you’ve got to call them through the fireplace” (village Pikhotskee, Ovruts’kyi District of Zhytomyrska Oblast) However, the desired effect could only be achieved if there was smoke going out the chimney. As for the smoke in this context, it is worth mentioning that it was used as one of the ways to to get rid of unnecessary, but important, sacred things (sacred willow, old icons, etc.). The tradition forbade throwing them away so they were burnt in the fireplace: “to God with smoke” (Serniki village, Zarichansky District, Rivne Oblast).

The pich and the help of the deceased ancestors in the beliefs of Ukrainians were so “strong” that even the instruments for servicing the pich were used for some magic rituals. They threw the rake and shovel (a special shovel for taking the bread out) “crosswise” from the threshold in order to prevent hail in the village of Liskivtsi, Kamyanets-Podilsky District of Khmelnitskyi Oblast.

The stove also played an important role in “medical magic and ”folk medicine”. The clay from the pich was used to treat wounds. The baby that cried for a long time was taken to the midwife, who carried it over the smoke three times to get rid of the problem. (Sapanov, Kremenets District, Ternopil Oblast)

The pich often acted as one of the locations where the “domovyk” (bogie) hid — this creature was a demonological character with guardian functions for the inhabitants of a certain house and its economy. Domovyk usually “sits” under or inside the pich  (village Dubchytsi, Zarichne District, Rivne Oblast, Sushytsia village, Stary Sambir District, Lviv Oblast). Hutsuls tried to please “domovyk” by leaving fresh milk on the stove. In Zhytomyr province water and a clean towel were left; otherwise, “domovyk gets into the house through the chimney, sits on your chest, does not let you sleep well”. (village Vistupovichi, Ovruchsky District, Zhytomyr Oblast).

It is interesting that the function of the channel to the other world did not only make our ancestors respect the pich, but they also loved it: it was whitewashed, painted, tiled and decorated in many different ways.

In fact, the list of such ethnographic observations is much, much longer, and I have just provided a few examples. It’s really hard to understand how one could sleep on the furnace with the thought that the gobie can sit on your chest at night because he does not like the milk you left for him. However, it was routine and a part of each family’s life not so long ago. Some of these superstitions and many others that we have not mentioned still can be observed in Ukrainian villages and we invite you to visit the place where your grandfather’s umbilical cord is buried. LOL.

We hope that our blog, our tours of Ukraine and our heritage tours will help you to understand the mentality and culture of your people better.

We invite you to follow Andrii Dorosh on FB to receive updates on our next publications.